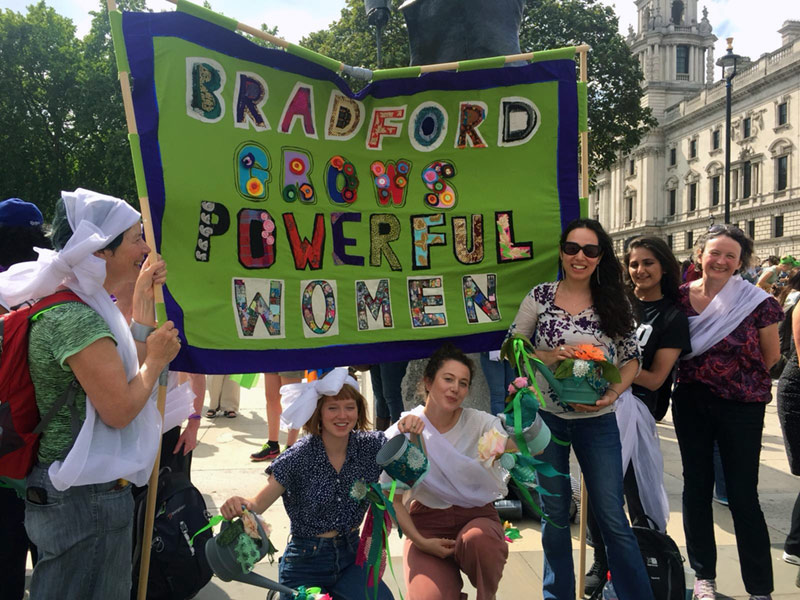 Jean was commissioned by Bradford arts organisation The Brickbox in 2018 to make a banner with a group of Bradford women for Artichoke’s PROCESSIONS project – a national mass participatory artwork to celebrate 100 years since women in the UK began to have electoral power.

2018 was the centenary of only some privileged women being granted the right to vote – and our struggle is in no way over – but the 1918 Representation of the People Act was an important milestone in the history of equality.

In a series of open workshops, Jean, The Brickbox and a team of brilliant women from across the district co-created a unique banner with the message “Bradford Grows Powerful Women”. This banner was then be processed through the streets of London, carried aloft by it’s makers at a huge coming-together in June 2018.

This vast artwork was based on an original idea by creative director Darrell Vydelingum. PROCESSIONS was commissioned by 14–18 NOW, the UK’s arts programme for the First World War centenary and produced by Artichoke. With support from the National Lottery through Arts Council England and the Heritage Lottery Fund, and from the Department for Digital, Culture, Media and Sport.

Read a blog about the process of making the banner on the Brickbox website.